Research has already proven that aerobic exercise helps to strengthen the brain and plays a part in new neuron growth, but not many studies have looked at how the brain is affected by yoga. A review of the research has found evidence that a lot of the identical brain functions and structures affected by aerobic exercise are also enhanced by yoga.1✅ JOURNAL REFERENCE
DOI: 10.3233/BPL-190084

The review concentrated on 11 studies on the relationship between brain health and yoga practice. Five of the studies involved people with no yoga practice background who participated in one or more weekly yoga sessions over 10 to 24 weeks, with brain health compared at the start and the end of the intervention. Brain differences were measured in the other studies between people who practice yoga regularly and individuals who don't.

Each one of the studies made use of brain-imaging methods such as single-photon emission computerized tomography, functional MRI, or MRI. All the studies involved Hatha yoga, which included breathing exercises, meditation, and body movements.

Some areas of the brain that consistently came up were identified from these 11 studies, and they were surprisingly not too different from what is seen in research on exercise. As an example, increases in the hippocampus volume are seen with yoga practice. A lot of studies exploring the effects that aerobic exercise has on the brain have shown a similar hippocampus size increase. The hippocampus is involved in the processing of memory and is known to shrink as we grow older. It's also the structure that's first to be affected in Alzheimer's disease and dementia.

Although a lot of the studies are exploratory and inconclusive, the research points to other important changes in the brain related to the regular practice of yoga. The brain structure that plays a part in emotional regulation known as the amygdala is generally bigger in practitioners of yoga compared to those not practicing yoga. The cingulate cortex, prefrontal cortex, and brain networks such as the default mode network are also generally bigger or more efficient in individuals who are regularly practicing yoga.

The area of the brain just behind the forehead known as the prefrontal cortex is crucial for multitasking, decision-making, planning, considering options, and selecting the correct option. The default mode network is a group of brain areas that are involved in thinking about the self, memory, and planning. The cingulate cortex is part of the limbic system, a circuit of structures that plays an important part in memory, learning, and emotional regulation.

It was also found that the brain changes observed in people practicing yoga are related to better cognitive test performances and emotional regulation measures. Yoga isn't inherently aerobic, so there are other mechanisms responsible for producing these brain changes.

The researchers suspect that emotional regulation enhancement is key to the positive effects that yoga has on the brain. For example, stress has been associated with hippocampus shrinkage and poorer memory test performances. In earlier studies, the researchers were examining how the cortisol stress response is changed by yoga. They discovered that individuals performing yoga for 8 weeks had a reduced cortisol response to stress that was related to better performance on tests of attention, task-switching, and decision-making.

Yoga helps with the management of stress in individuals with or without anxiety disorders. Yoga practice also helps in improving emotional regulation to reduce depression, anxiety, and stress, which appears to improve brain functioning. 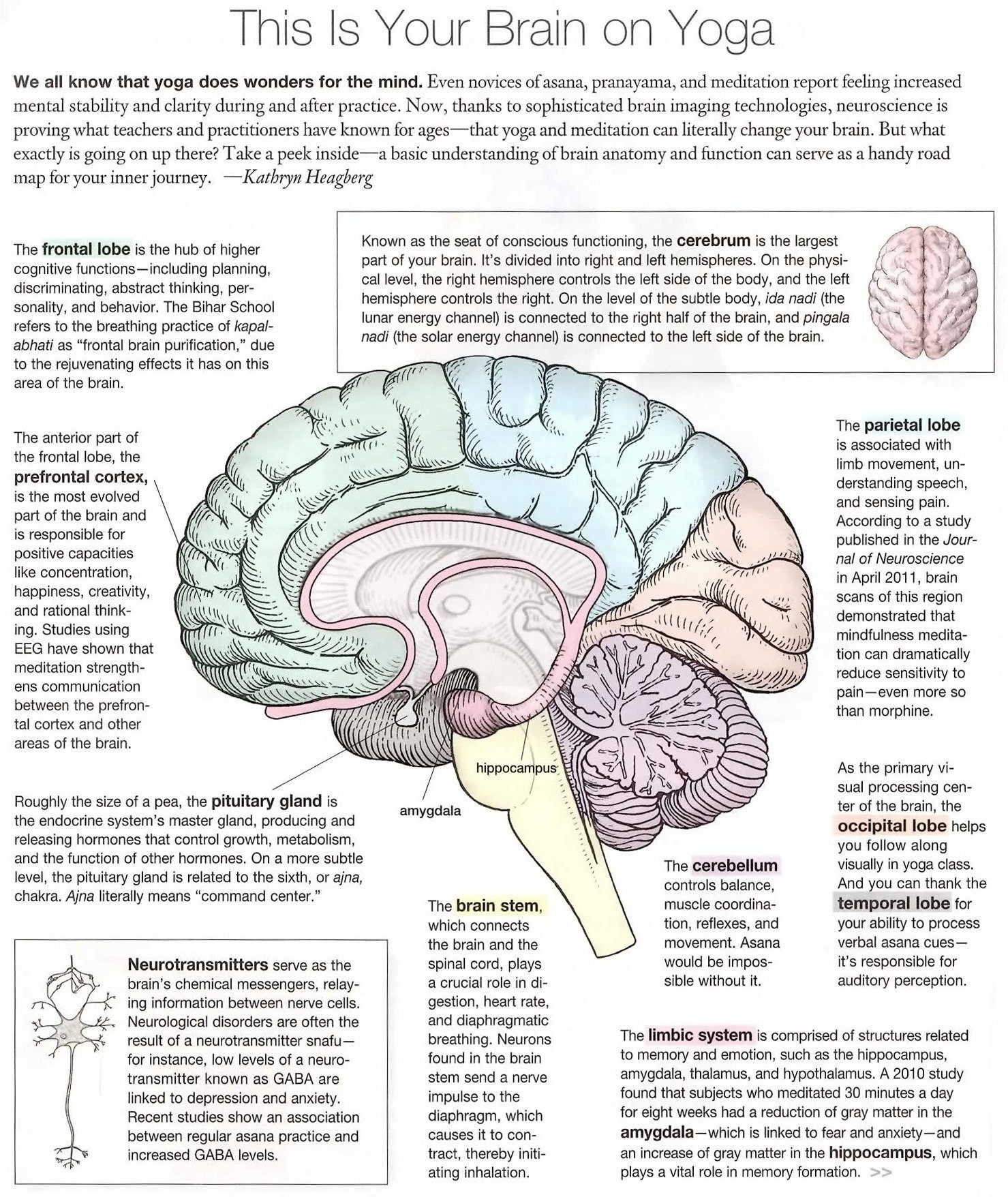