More than half of all smokers say that they have embarked on an unsuccessful smoking cessation journey in the past year.

There’s a reason that most adults try and fail seven times before finally going smoke-free for good. Quitting smoking is tough, even if you try every one of the smoking cessation methods that are out there.

Nicotine is a highly addictive substance (almost as addictive as heroin and cocaine according to some studies) that is found in tobacco. Withdrawal from this substance causes the intense cravings that are associated with smoking cessation.

Although the intense symptoms of nicotine withdrawal only last a week or two, most people give up before these symptoms ease. This ultimately leads to their failure when trying to quit smoking.

There are a lot of significant changes that occur in the body when you quit smoking. Within just a few minutes of finishing your final cigarette, positive changes begin to occur and your health immediately begins to improve.

These benefits continue for several months after you have quit smoking. In fact, the benefits of ditching the cigarettes remain with you for life.

So, what happens in your body when you quit smoking?

Within the first quarter of an hour after having your last cigarette, physiological changes have already begun to take place inside your body.

Your blood pressure begins to decrease and your heart rate lowers. The lungs begin to remove the chemicals and irritants that were taken in through the tobacco smoke.

Just eight hours after your final cigarette, the levels of carbon monoxide in your body return to normal. This enables your red blood cells to carry more oxygen around your body, which can make you feel more energised and alert.

Within a day of quitting smoking, your previously constructed capillaries will have relaxed.

When the vessels are relaxed, blood can flow more easily through the body. There is less strain on the heart and your risk of cardiovascular disease already begins to decrease.

Two days after your last cigarette, you might start to find that your sense of smell and taste feel sharper. Usually, cigarettes dampen these senses.

At this stage, the nicotine cravings are likely to be in full swing. You may have mood swings, anxiety, and food cravings. You might struggle to concentrate at work due to brain fog.

After two days of no smoking, breathing should begin to feel easier. Your lungs will relax and open up, making the exchange of oxygen and carbon dioxide much easier.

The seven days after you quit smoking can be difficult. Nicotine cravings will be in full force and your urge to reach for the cigarette packet will be more intense than ever. However, smokers who reach day seven are nine times more likely to quit smoking for good, so keep going!

Within the first seven days, a number of beneficial changes will have taken place in your body. Your lungs will be clearer and breathing will feel easier.

Lung function increases by around 30% within the first two weeks of quitting smoking and your circulation will also have improved. The stress on your heart and lungs will have lessened and your energy levels will be on the rise.

In one month, you will start to feel the incredible benefits of quitting smoking. You will feel fit and energised, and you will find that you don’t feel as breathless doing everyday activities or exercise.

This is because the alveoli in your lungs are starting to grow back in a healthier state and the mucus in your lungs have been mostly cleared. The reduced mucus build-up will also boost your immune system, making it less likely for you to get a bacterial or viral infection.

For women, fertility will have started to improve, and the risk of premature birth decreases.

Six months after quitting smoking, your nicotine cravings will have drastically reduced. Your ability to cope with the many stresses of life will have improved and you will find that smoking a cigarette is no longer the first instinct you get in stressful situations.

You will also notice that you are coughing up a lot less phlegm and mucus. Your airways should feel much clearer.

Breathing will feel easier due to the decreased inflammation around the lungs that was previously caused by the carcinogens in cigarette smoke. This will be especially noticeable during exercise as you will feel less breathless.

When you’ve not smoked a cigarette for 12 months, your lung health will be much improved and your risk of lung cancer significantly decreases.

Most of the benefits at this stage may be less noticeable as they are internal changes. The overall health of your cardiovascular system will be improving day by day as your cells regenerate in a smoke-free environment.

You will notice that you are able to socialise more with your friends and family because you won’t need to go outside for a cigarette every hour or two. You have more freedom in where you go and what you do!

By now, you will also have started to reap the financial benefits of smoking cessation. Your expenses will have decreased dramatically. Depending on how much you used to smoke, you may be saving several hundreds of pounds every year.

Several years after ditching the cigarettes, your risk of lung cancer will have decreased to that of a non-smoker. Your risk of other cancers will have also decreased, including cancers of the mouth, throat, oesophagus, kidneys, bladder, and pancreas.

After the 10-year mark, your risk of cardiovascular disease will also have lowered to the level of somebody who does not smoke. Your overall health and well-being will be significantly better than when you smoked. 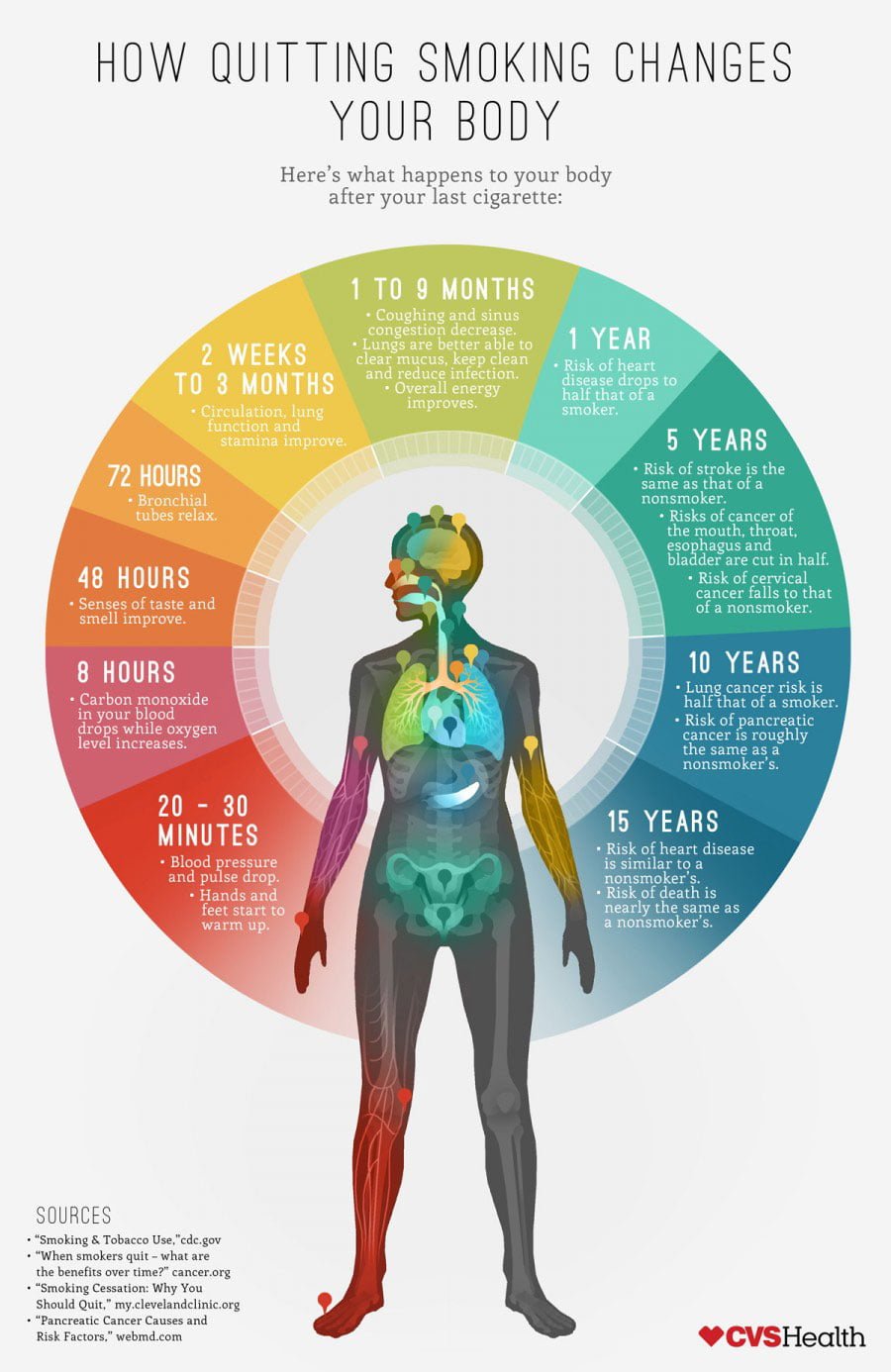