According to researchers, increased risk of miscarriage, neonatal health issues, preterm birth as well as the possibility of long term neurobehavioral problems, such as autism, indicate that a class of antidepressants called selective serotonin reuptake inhibitors, or SSRIs, should only be prescribed with extreme caution and with full counseling for women suffering from depression and trying to fall pregnant.

The researchers performed a review of published studies analyzing use of antidepressants in pregnancy.[1] Over the past twenty years antidepressant use has increased 400%. They are now the most common medication prescribed in the U.S. for individuals 18 to 44 years old, the childbearing years for the majority of women. Infertility is more likely to be experienced by women in their late 30s and early 40s, and the majority of women will report depression symptoms while undergoing infertility treatment, particularly after unsuccessful treatment cycles.

As much as 11 % of women having fertility treatment admit taking an SSRI to fight depressive symptoms, though the researchers uncovered no evidence of improved results from using antidepressants. They also found a lot of controversy around the efficacy of SSRIs. Numerous studies found SSRIs to be no more or only slightly more effective compared to placebos for treating depression.

There is growing evidence that SSRIs may well decrease pregnancy rates for women having fertility treatment. Studies also show that the use of antidepressants in pregnancy increases miscarriage rates. There’s also a strong indication of congenital abnormalities, of which the most documented is the connection between cardiac defects and the antidepressant Paxil. This connection resulted in the FDA instructing the manufacturer to change Paxil’s risk factor to D, which indicates a risk to the fetus.

In over 30 studies, the data overwhelmingly points to an increased early delivery risk with the use of antidepressants in pregnancy. This is an important finding because babies born earlier than 37 weeks have a risk of numerous health problems.

Research results also show that the use of antidepressants in pregnancy, particularly if the use extends more than the 1st trimester, contributes to an increased risk of pregnancy-induced hypertension as well as preeclampsia.

Long-term exposure to SSRIs seems to be associated with a greater incidence of birth weight dropping below the 10th percentile, along with higher rates of respiratory distress.

Health complications connected to the use of antidepressants in pregnancy can be carried into infancy and childhood. One study revealed that infants subjected to antidepressants in pregnancy experienced a 30% increased risk of Newborn Behavioral Syndrome, commonly connected with persistent crying, jitteriness as well as difficulty feeding. The syndrome can also in more uncommon instances result in breathing difficulties and seizures leading to the need for incubation. Research has also found delayed motor development in toddlers. A study has also revealed double the increase of risk of autism spectrum disorders linked to the use SSRI antidepressants in pregnancy, with the strongest effect linked to treatment in the 1st trimester. 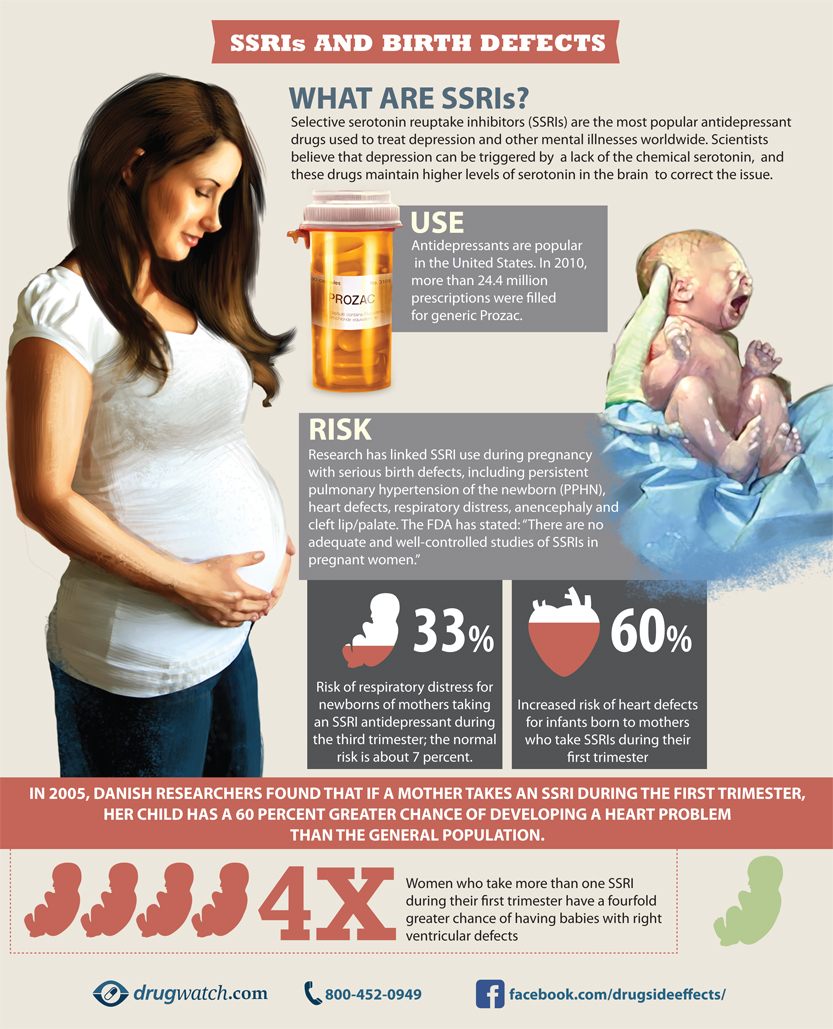