In a study of twins, those who smoked exhibited considerably more premature facial aging in comparison to their identical twins who didn’t smoke. The study found significant facial aging differences between twins with a difference of as little as 5 years in their history of smoking. The study results also indicate that the impact that smoking has on facial aging is most noticeable in the lower 2-thirds of the face.1✅ JOURNAL REFERENCE
DOI: 10.1097/PRS.0b013e3182a4c20a

For the study, pairs of identical twins were identified by their differences in smoking history. Either one twin in each pair smoked or the other didn't, or one twin smoked a minimum of 5 years longer. Of the 79 twin pairs analyzed, the average age was 48 years and 57 were women.

Close-up, standardized photographs were taken of each twin's face by a professional photographer. Questionnaires were also completed by the twins relating to their lifestyle and medical histories. With no knowledge of their smoking history, the facial features of the twins were analyzed by cosmetic surgeons, such as wrinkle grading and facial features related to age. The objective was to identify “specific aspects of facial aging” that were impacted by smoking.

Scores on a number of facial aging measures were significantly worse for the twins who smoked. They had more upper eyelid sagging, and also more bags of the lower eyelids and beneath the eyes. The smokers had higher facial wrinkle scores as well, such as more pronounced lines between the mouth and nose, sagging jowls, and wrinkling of the lower and upper lips.

The majority of the differences related to smoking affected the middle of the face and also the lower third. The aging of the upper face had fewer differences, which included lines on the forehead or around the eyes known as “crow's feet”.

The twin who smoked or smoked for longer could be identified in the majority of cases, according to the facial aging differences as rated in photographs. The twin pairs shared other similar environmental factors that can influence facial aging, such as work stress, alcohol intake, and sunscreen use. 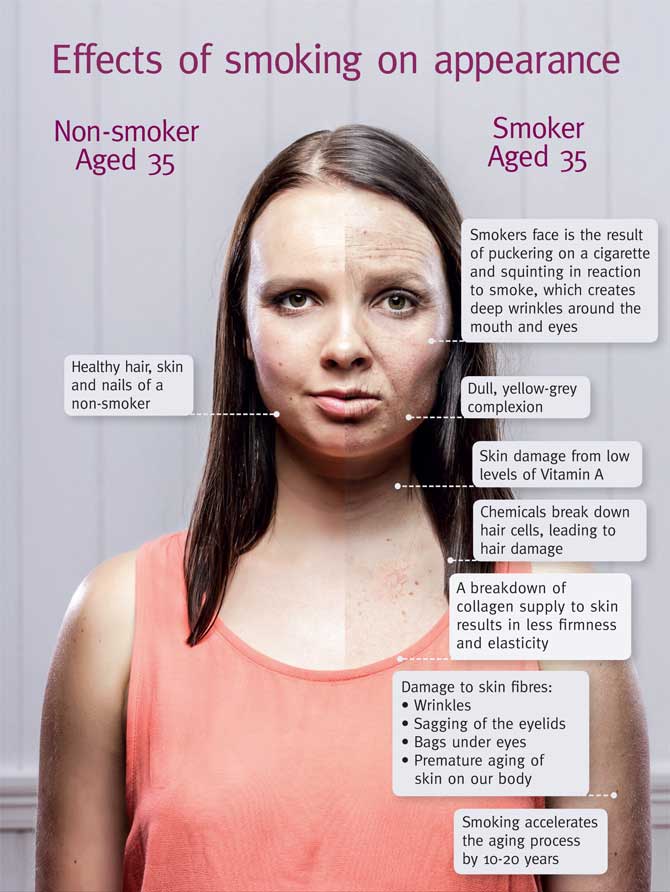