Introduction: What's the Difference Between Oolong Tea and Green Tea?

Oolong tea is a tea with leaves that are picked halfway through the oxidization process. Green tea, on the other hand, is fully oxidized. Oolong tea was initially made in China and Taiwan before it expanded to other parts of Asia. Green tea originated in China and then spread to the West via trade routes. Many people say that oolong tea tastes better because of its light taste and refreshing quality.

The difference in flavor of green tea and oolong tea

One major difference between oolong tea and green tea is the taste.

Oolong has the most diverse range of tea flavors. There are varieties that range from sweet and floral to dark, rich and smoky. It can also have base notes of honey and wood which green tea does not have. Unlike green tea, oolong has varying levels of astringency which means it doesn't have a “good or bad” taste.

Green tea has a grassier flavor and a slight vegetal bitterness. Although its profile will vary depending on where it was grown, its packaging or brewing method, it typically tastes refreshingly mellow with light carbonation.

Oolong tea has a better taste, but is less popular. That said, more people tend to prefer it over green tea because they believe it’s healthier.

According to the National Cancer Institute, green tea is one of the most popular drinks in the world. It contains antioxidant compounds called polyphenols that are believed to be responsible for its benefits.

The first benefit of drinking green tea is that it can help prevent cancer. Green tea contains a compound called epigallocatechin-3-gallate or EGCG which can counteract tumor growth and reduce or prevent cancer from spreading.1✅ JOURNAL REFERENCE
PMC: PMC7397003

Men who drink green tea may have a lower risk of a more aggressive type of prostate cancer.2✅ JOURNAL REFERENCE
DOI: 10.1093/aje/kwm249

Studies have found that women who drink the most green tea have a 20% to 30% lower risk of developing breast cancer, one of the more common types of cancer in women.3✅ JOURNAL REFERENCE
PMID: 19437116

Drinking green tea can help to decrease your risk of developing the most common form of colorectal cancer.4✅ JOURNAL REFERENCE
PMID: 28454102

One study found that Japanese people who drink green tea are at much lower risk of type 2 diabetes. The effect was even greater in women.6✅ JOURNAL REFERENCE
PMID: 16618952

A meta-analysis suggests that green tea can have a positive effect on insulin sensitivity and blood sugar levels.7✅ JOURNAL REFERENCE
DOI: ajcn.112.052746

Green tea helps to increase the antioxidant capacity of blood, which helps protect against LDL oxidation. Numerous studies have shown that green tea may improve cholesterol levels, which can lead to a lower chance of developing heart disease.8✅ JOURNAL REFERENCE
DOI: 10.1002/14651858.CD009934.pub2

A study in China found that individuals who drink at least 1-2 cups of green or oolong tea each day reduced their risk of having a stroke.9✅ JOURNAL REFERENCE
DOI: 10.1161/STROKEAHA.109.548586

A study showed that individuals who drink tea, including oolong tea, every day over a 10-year period have a higher bone density.12✅ JOURNAL REFERENCE
PMID: 11996609

Oolong tea and green tea can be very beneficial for weight loss. They have both been shown to reduce visceral fat and waist size in people who are at risk of developing metabolic syndrome, which is a disorder that is characterized by abnormalities in cholesterol levels, blood sugar, blood pressure, and obesity.

However, some types of oolong and green tea can contain more caffeine than others, and someone's individual sensitivity to caffeine may vary. 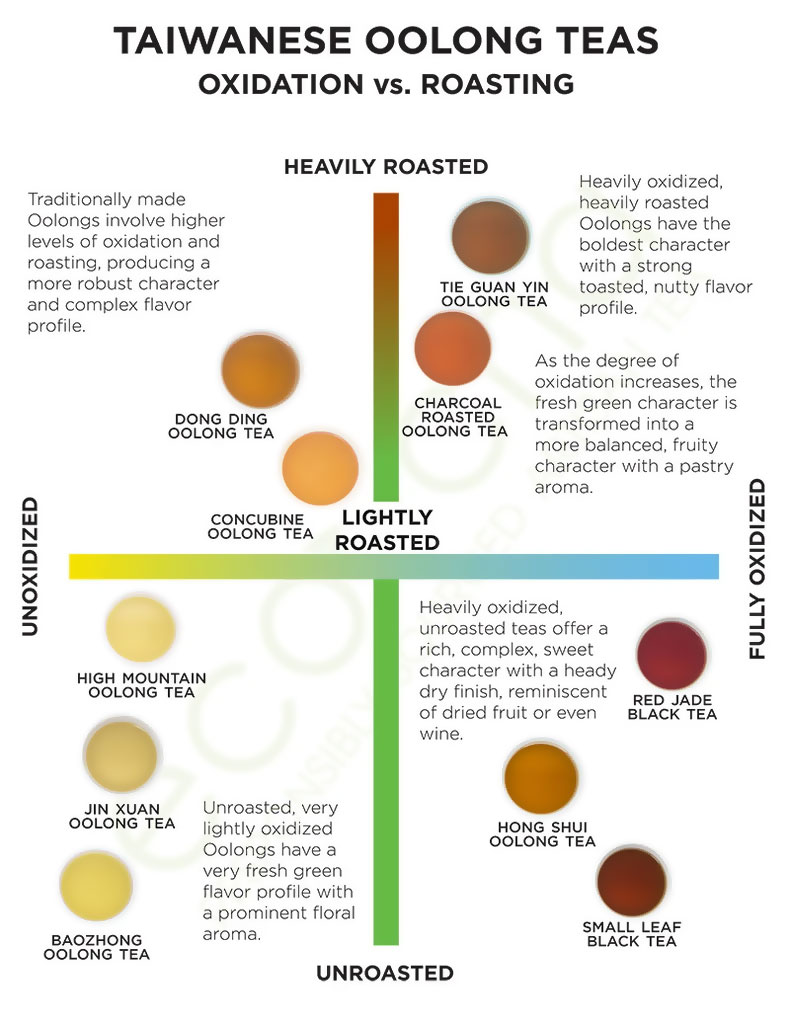