A study has provided a causal link between chewing and diet-induced thermogenesis. Eating slowly and chewing thoroughly helps in preventing weight gain and obesity, a healthy eating habit made popular a hundred years back and has since been tested in several studies. The process of chewing has been reported to enhance the expenditure of energy related to food metabolism and increase intestinal motility, which adds up to greater heat generation in the body after eating food, which is referred to as diet-induced thermogenesis.1✅ JOURNAL REFERENCE
DOI: 10.1038/s41598-021-03109-x

While these studies associated chewing-induced-diet-induced thermogenesis with improved digestion and activity related to absorption in the abdomen, a few crucial factors remained to be further explored. The researchers wanted to know if the size of the food bolus (food and saliva mixture) that made its way into the digestive tract was contributing to the increase in diet-induced thermogenesis seen after eating slowly. They also wanted to know if oral stimuli generated from the prolonged chewing of food contribute to increasing diet-induced thermogenesis. To define chewing slowly as an effective and proven strategy for weight management, they needed to investigate these factors.

A new study was designed incorporating liquid food to exclude the effects of the food bolus. The entire study consisted of 3 phases carried out on different days. For the control phase, 20-mL of the liquid test food was swallowed normally by the participants every half a minute. For the 2nd phase, the same test food was kept in the participants’ mouths for half a minute without chewing, thus allowing prolonged tasting prior to swallowing. For the 3rd phase the effect of both chewing and tasting was examined, the 20-mL test food was chewed for half a minute at a frequency of one chew per second before swallowing it. Variables such as fullness and hunger, gas-exchange variables, diet-induced thermogenesis, and splanchnic circulation were measured properly before and after consuming the liquid test food.

The outcomes of the study turned out to be quite informative. There wasn’t any difference in fullness and hunger scores between the trials. Diet-induced thermogenesis or energy production however increased after a meal was eaten, and it increased with the duration increase of chewing and each taste stimulation. Meaning oral stimuli increased diet-induced thermogenesis regardless of the food bolus influence, which corresponded to the duration of tasting food and the chewing duration. Protein oxidation and gas exchange also increased with the duration of chewing and taste stimulation, and so did splanchnic celiac artery blood flow. Because blood to the digestive organs is supplied by this artery, oral stimuli during chewing also increased the upper gastrointestinal tract motility.

The study results highlight that chewing thoroughly can help in preventing obesity and metabolic syndrome by the increase of energy expenditure. Although the energy expenditure difference for a single meal is small, the effect accumulated from multiple meals every single day for 365 days per year is significant. 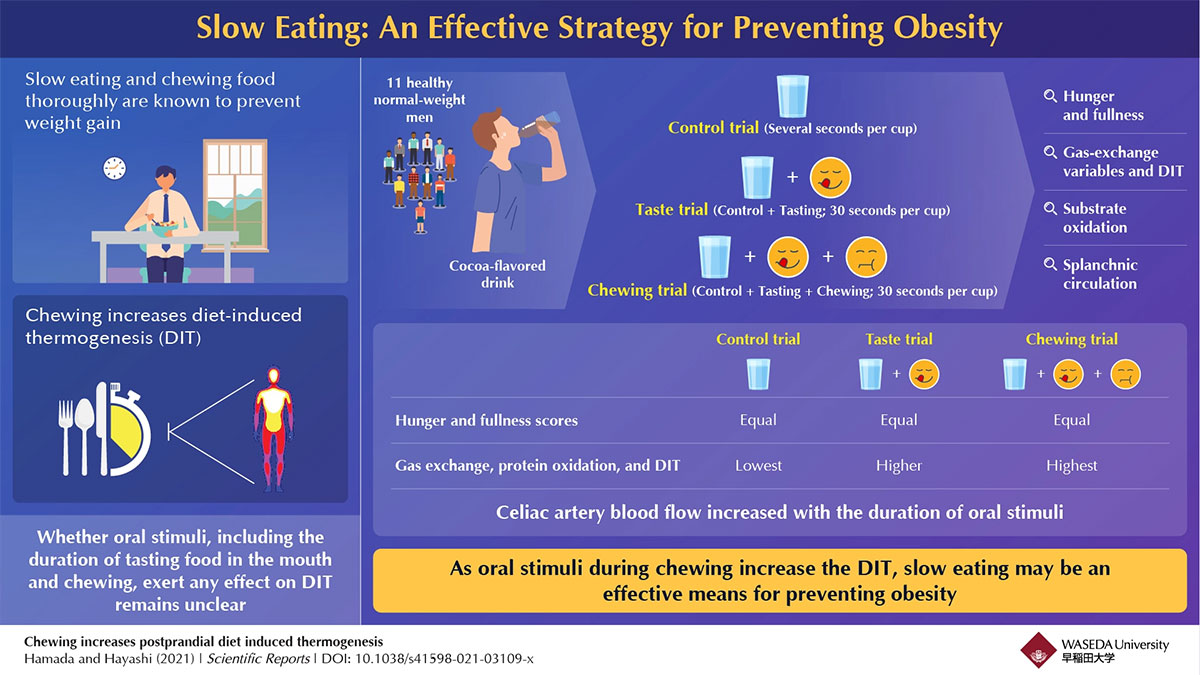