According to researchers, cognitive impairment caused by severe COVID-19 is comparable to that sustained from an average of 20 years of aging and is equal to an IQ loss of 10 points. Study results indicate the effects can still be detected for 6 months and longer following acute illness, and that recovery is gradual at best.1✅ JOURNAL REFERENCE
DOI: 10.1016/j.eclinm.2022.101417

To examine this association in more detail, data were analyzed from 46 patients who had received hospital care for COVID-19 in the intensive care unit or on the ward, of which 16 received mechanical ventilation while in hospital.

Survivors of COVID-19 were not as accurate and had slower response times compared to the matched control individuals, and these deficits could still be detected when the individuals were followed up 6 months later. Individuals needing mechanical ventilation were affected the most. By comparing them to 66,008 individuals from the general public, it's estimated that the cognitive loss magnitude is comparable to that sustained from an average of 20 years of aging and that this is equal to an IQ loss of 10 points.

Survivors scored especially badly on tasks like verbal analogical reasoning, a result that supports a problem that's commonly reported, i.e. difficulty finding words. Slower processing speeds were also seen, which is in line with prior post COVID-19 observations of reduced brain glucose consumption in the brain's frontoparietal network, which is responsible for working memory, complex problem-solving, and attention, amongst other functions.

According to the researchers, cognitive impairment is typical of a broad variety of neurological disorders, which includes dementia, as well as normal aging, but the cognitive patterns seen in this study was distinct from all other disorders.

Although it's now well known that severe COVID-19 recovered individuals can have a wide range of poor mental health symptoms such as disturbed sleep, low mood, low motivation, post-traumatic stress, anxiety, depression, and fatigue, the researchers found that cognitive deficits were better predicted by the severity of acute illness.

The scores and reaction times of the patients started improving over time, although any cognitive faculty recovery was gradual at best and probably influenced by a variety of factors such as illness severity and its psychological or neurological impacts.

The researchers say various factors could contribute to the cognitive deficits. Direct viral infection is a possibility, but not likely to be a significant cause; it's rather more likely a combination of contributing factors, such as blockage of small or large blood vessels caused by clotting, insufficient blood or oxygen supply to the brain, and microscopic bleeds. Emerging evidence however indicates that the most significant mechanism could be damage as a result of the inflammatory response of the body and immune system.

Although this study examined hospitalized COVID-19  cases, the researchers say that even those individuals not ill enough for admission might also have symptoms of mild impairment. 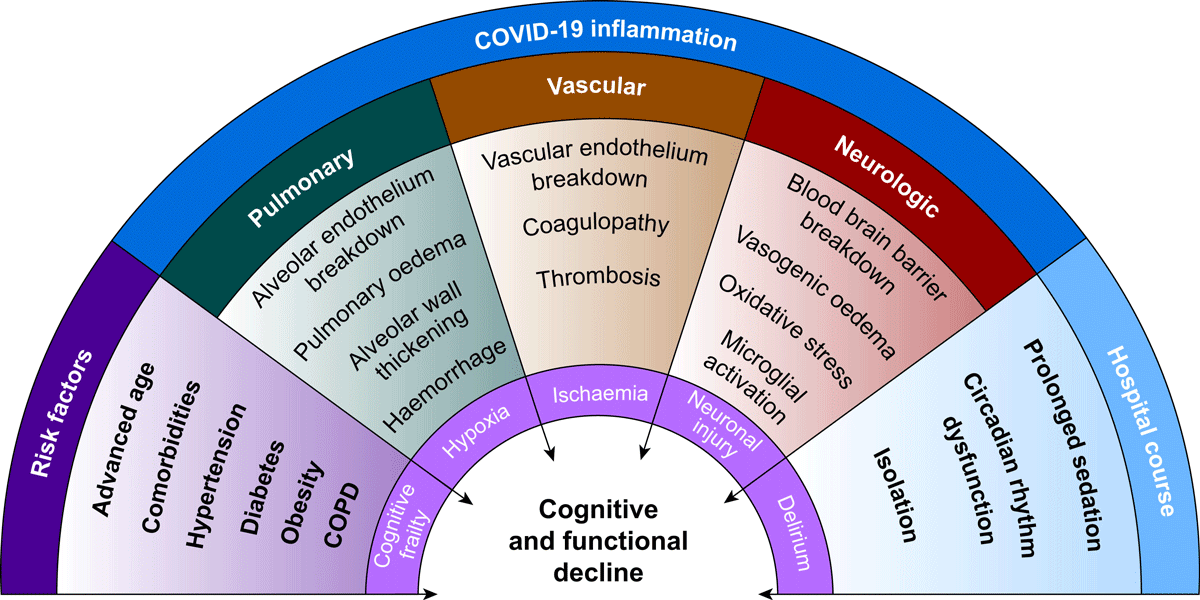